During critical learning periods, or windows of opportunity, pathways grow that form the foundation for future skills. 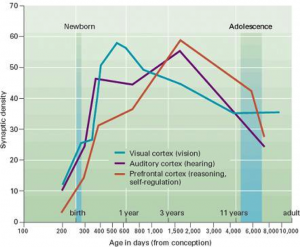 The early stages of development are strongly affected by genetic factors; for example, genes direct newly formed neurons to their correct locations in the brain and play a role in how they interact. However, although they arrange the basic wiring of the brain, genes do not design the brain completely.

Instead, genes allow the brain to fine-tune itself according to the input it receives from the environment. A child’s senses report to the brain about her environment and experiences, and this input stimulates neural activity. Speech sounds, for example, stimulate activity in language-related brain regions. If the amount of input increases (if more speech is heard) synapses between neurons in that area will be activated more often.

Repeated use strengthens a synapse. Synapses that are rarely used remain weak and are more likely to be eliminated in the pruning process. Synapse strength contributes to the connectivity and efficiency of the networks that support learning, memory, and other cognitive abilities. Therefore, a child’s experiences not only determine what information enters her brain, but also influence how her brain processes information.

I am developing my sense of confidence at this stage. Encouragement and understanding of what I can and cannot do helps me feel safe enough to try again. With encouragement, I am unafraid of failing and am confident enough to try again and not give up. I have the ability to persist on task if I feel motivated and successful!

I have begun to develop conceptual understanding of objects beyond the items' physical attributes and this is a significant development milestone in the levels of discrimination and classification skill. The ability to identify similar objects/pictures in terms of functions usually develops between 3 year 4 months to 5 year 11 months.

Motor Development: Gross Motor Skills
• I can now jump, climb, roll, dance and play just about nay sport (on a rudimentary level)
• I have increased muscle control, so I can throw a ball with two hands, catch it when it is thrown back to me and kick a ball at a large target.

Motor Development: Fine Motor Skills
• I can cut along a line
• My improved dexterity makes puzzles and block stacking my favorite pastimes!
• I may be able to control my bladder and bowel movements, but I might still have accidents especially at night and naptime.

Language and Thinking Development
• I am learning to identify the objects/pictures according to their respective functions.
• I have an extensive vocabulary and learn and integrate new words quickly into my increasingly long sentences
• I am rapidly improving my ability to recognize numbers and letters, implementing hem into my daily life, although I do get confused at times!