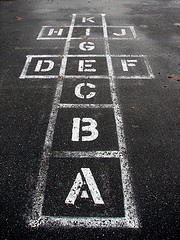 Early Roman soldiers, dressed in full battle armor, were trained to hop up and down a 100 foot-long series of squares that had been scratched into the ground to improve their strength and agility. When the Roman armies took this exercise to the British Isles, children devised their own games of hopping in squares.2 The earliest recorded reference to the game of hopscotch was in Poor Robin’s Almanac in 1677, where the game was called scotch hoppers!

Children benefit from playing hopscotch and other games with rules in many ways. They learn to follow instructions, wait their turn, and important social skills involved in playing fair and being a good winner or loser. Hopscotch can be a game of short duration during recess on the playground or can be played for longer periods of time as the children become more physically skilled in negotiating the squares. Children’s motor skills, balance, and agility are developed as they play hopscotch.

Hopscotch is a great way to exercise your muscles!