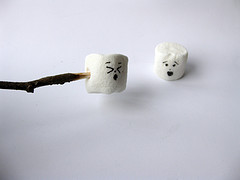 This activity is known as the Stanford Marshmallow experiment, a series of studies conducted in the late 1960s and early 1970s by Psychologist Walter Mischel, then a Professor at Stanford University. In follow-up studies of this test, the researchers found that children who were able to wait longer for the preferred rewards tended to have better life outcomes, as measured by SAT scores, educational attainment etc. He found significant differences between those who had wolfed down the marshmallow — they were now found to be more easily frustrated, indecisive, disorganized — and those who, as tots, had been able to control themselves — they were now more confident, self-reliant and — scored about 200 points higher on the SAT!

When children demonstrate self-control, it's a strong indicator of later educational and economic success. But even for kids who can't resist immediate gratification, self-control is a skill that can be taught. Try this activity to test your child’s ability to defer instant gratification for a bigger reward. Try it again to help your child practice the ability to resist and gain self-control!